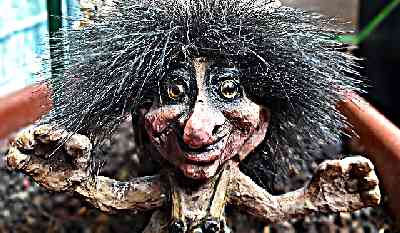 With Halloween less than a week away, when I read the article about internet trolls at Grammarly’s blog, I thought it was work a jaunt through a bit of research. Trolls are part of Halloween, right?

Internet Troll: a person who sows discord on the Internet by starting quarrels or upsetting people, by posting inflammatory, extraneous, or off-topic messages in an online community (such as a newsgroup, forum, chat room, or blog) with the intent of provoking readers into an emotional response or of otherwise disrupting normal, on-topic discussion, often for the troll’s amusement. —Wikipedia

Trolling has been going on throughout cyberspace for over twenty years–probably more like twenty-five years. From what I read at Wikipedia, it was first discovered in the forums and newsgroups. Way back then, where else would trolls hang out? Social media sites may have been around but, if so, the following was minuscule.

Reading on in the Wikipedia, I found myself disagreeing with the person who had contributed the information on this subject. If the response is showing another point of view and being respective when doing so, I cannot understand how that can be called trolling. Yet, according to what I read, even done unintentionally, it may be classified as such.

Since the dawn of the blogosphere, the authors of those pages have asked for comments to the posts they write. Some, like me, have gone as far as telling our readers we welcome criticism as well as the warm fuzzies. If a blogger does not want any negative comments, I think that person should keep that part of his or her blog closed. Either that or monitor each comment and delete the ones not wanted. The latter sound totally ridiculous to me but each to their own.

ABC News in Australia published an article last July that stated more or less, what I think trolling is:

We define trolling as deceptive and disruptive online behaviour, which typically involves posting inflammatory and malicious comments to deliberately provoke and upset people.

An example might be posting a deceitful and inflammatory post on a Facebook memorial page, deliberately designed to upset the person’s family and friends. —ABC News July 12, 2017

Having a difference of opinion and expressing it with respect and tack does not fall into this category. Yet, I have seen people on media sites responding to opposing views with unneeded disdain, all because they did not agree with the one who had the diverse opinion. In addition, calling that person a troll for being different from them.

Trolling can be harmful. I do not doubt that for a moment. Sometimes it is unduly hurtful. However, even off the internet, people are saying hateful things. It is a human flaw I think most of us try to curtail, if not try to demolish altogether. Still, there are times when we speak before thinking.

We try different tactics to avoid the trolls in our daily lives. If possible, we completely ignore their existence. We give them a grimacing look and turn away. We change the subject of conversation.

Internet and off internet trolls speak out [type out] to get the emotional reply. For some unfathomable reason, they like getting that negative reaction. They get a kick out of ruffling people’s feathers. Maybe we are responding to these people in the wrong way. The Navajo Nation believes the way to stop bad behavior of any sort is by giving that person more kindness, attention, and love. If we did this, would this lessen the activity of trolls? They would not be getting the recognition they seem to be yearning for. That is for sure.

Trolling is going to happen no matter how much we want it to cease. I do believe we can reduce it though by being mindful of our words and not getting frazzled when we are exposed to it and, therefore, not giving the trolls what they desire.

How do you handle yourself when you come across a troll?